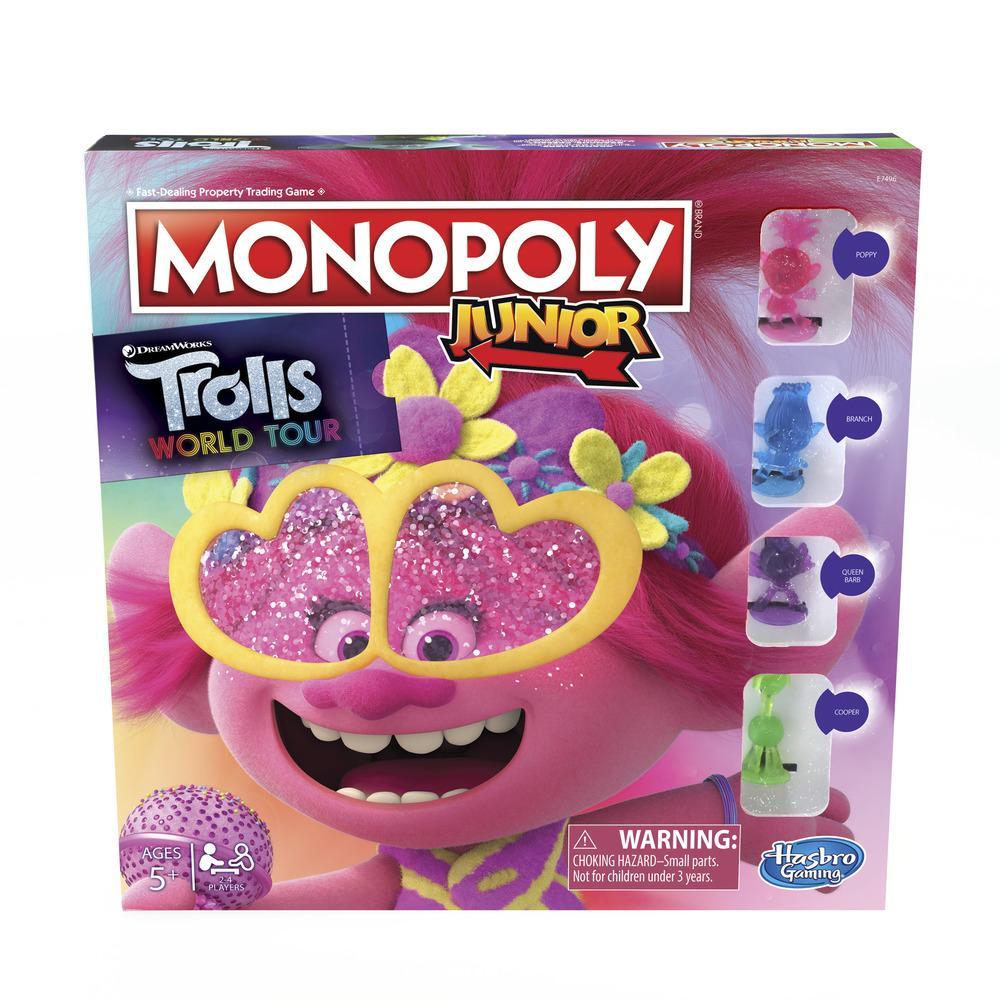 Collect the most Tiny Diamond cash while taking an imaginary journey through the colorful DreamWorks Trolls World. In this Monopoly Junior: DreamWorks Trolls World Tour edition board game, players move their character token around the board buying and selling locations inspired by the Trolls World Tour movie. It's so much fun for kids to place a "sold" sign on their very own property. And if a player owns both properties in the same color, they can charge double the rent! The board game makes a fun gift for Trolls fans and Monopoly Junior fans, ages 5 and up.
DreamWorks Trolls Copyright 2019 DreamWorks Animation LLC. All Rights Reserved.
The Hasbro, Hasbro Gaming, Parker Brothers, and Monopoly names and logos, the distinctive design of the gameboard, the four corner squares, the Mr. Monopoly name and character, as well as each of the distinctive elements of the board and playing pieces are trademarks of Hasbro for its property trading game and game equipment.

MONOPOLY GAME: DREAMWORKS TROLLS WORLD TOUR EDITION: In this Monopoly Junior game, kids can imagine joining Poppy and other Trolls characters in their adventures through the Troll World
TROLLS THEMED GAMEBOARD: It's a hair-raising good time as players move their character token around the gameboard buying and selling properties inspired by the Trolls World Tour movie
TINY DIAMOND CASH PACK: Buy and sell properties using Tiny Diamond Monopoly cash. The player with the most Tiny Diamond cash after someone goes bankrupt wins the game
TROLLS CHARACTERS: Fans of DreamWorks Trolls movies can imagine playing along with some of their favorite DreamWorks Trolls characters such as Poppy, Branch, Queen Barb, and Cooper
SIMPLIFIED MONOPOLY GAMEPLAY: Monopoly Junior is a good introduction to the Monopoly game. It's designed to be fast, fun, and exciting for younger players. It makes a great gift for kids ages 5 and up