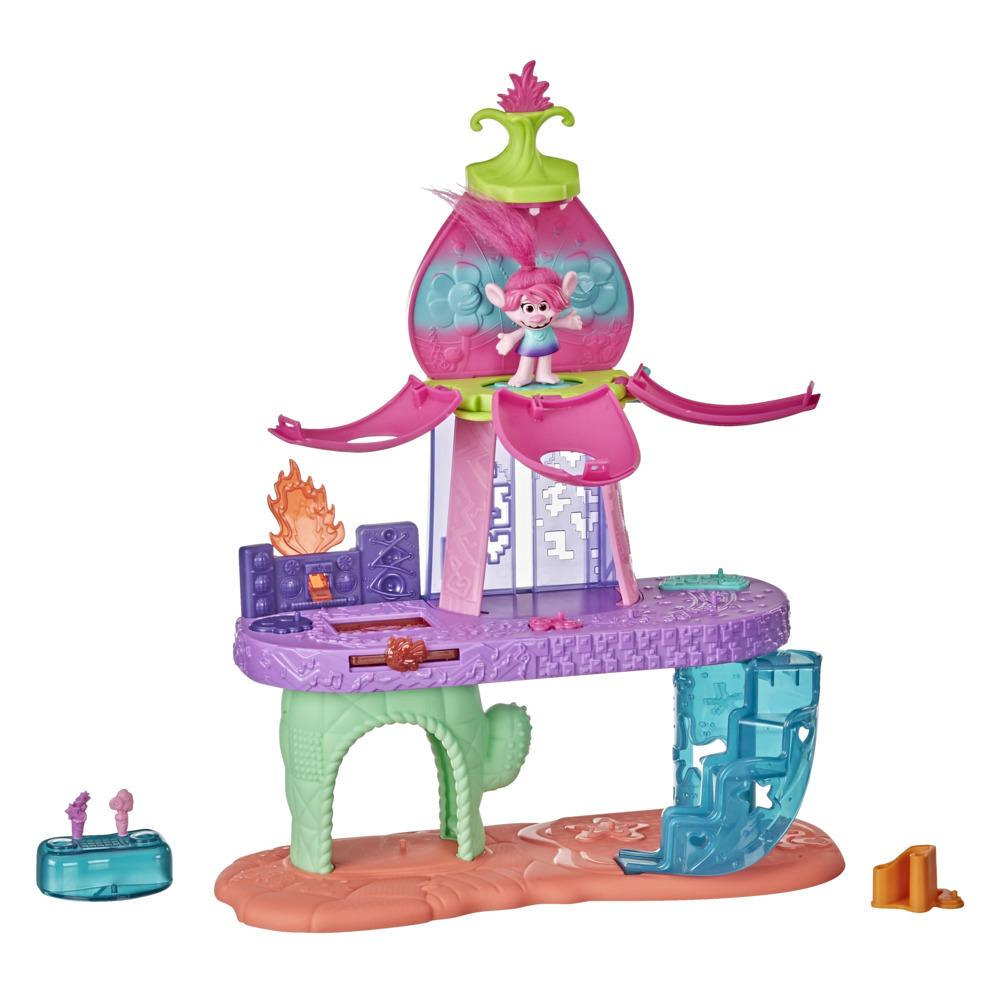 DreamWorks Trolls Poppy makes a grand entrance with Poppy's Blooming Pod. Kids can put her in the Pop World pod on top, then push a button to make the pod open like she's beginning the big show. She can ride the elevator down, visiting the Hard Rock stage, where pushing a button makes pretend flames shoot up, then head over to the DJ booth to spin records for her friend from the Techno Reef area. A trap door leads down to another area, inspired by the Country Music land of Lonesome Flats. This playset plays 3 different songs from the movie DreamWorks Trolls World Tour, the Pop song "Trolls Just Want to Have Fun," the Hard Rock song "Rock You Like a Hurricane," and the Techno hit "One More Time." Inspired by the movie DreamWorks Trolls World Tour, this delightful toy makes a great gift. Includes Poppy figure with hair. Other figures sold separately. Subject to availability
DreamWorks Trolls Copyright 2020 DreamWorks Animation LLC. All rights reserved.
Hasbro and all related terms are trademarks of Hasbro.

POPPY'S BLOOMING STAGE: Kids can pretend they're putting on a show with this fun DreamWorks Trolls playset toy, featuring 4 different musical worlds from the movie DreamWorks Trolls World Tour
DREAMWORKS POPPY MAKES A GRAND ENTRANCE: Kids can put Poppy in the pod on top, push a button to make the pod open revealing the star of the show, then take the elevator to other musical worlds
PLAYS 3 DIFFERENT SONGS FROM THE MOVIE: Playset plays "Trolls Just Want to Have Fun," "Rock You Like a Hurricane," and "One More Time" from the movie DreamWorks Trolls World Tour
MORE MUSICAL WORLDS: Kids can pretend the included Poppy figure is performing on the hard rock stage, spinning records at the techno area, or visiting her country music friends at Lonesome Flats
BATTERIES INCLUDED: The Blooming Pod Stage comes with batteries, so kids can start playing right away

you are not eligible to visit the site.